The Halls at Hanham Hall some more details.

I recently received an email in response to the previous Blogg. Michael Brandon-Jones  a grandson of Agatha Hall has written a short account which I include here unedited. 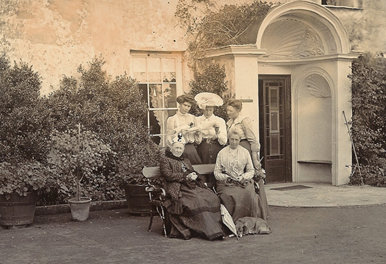 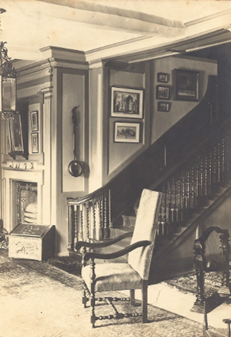 A photograph of the Hall and Staircase at Hanham Hall taken by Edith Margaret Hall. 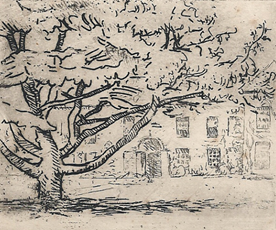 An original sketch of Hanham Hall by Agatha Catherine Hall

My grandmother Agatha Catherine Shore (1878-1950) was a student at the Slade School of Art from 1898 to 1901. She exhibited at the New English Art Club and the Society of Women Artists. Her painting of a scene from Romeo and Juliet was included in the exhibition of British Art at the Whitechapel Art Gallery in 1914. A few of her portrait paintings are now at St John’s College, Cambridge where her husband Lewis Erle Shore (1863-1944) was a lecturer in physiology. She was the secretary of the Cambridge Drawing Society from 1922 to 1946. Agatha and Lewis were married on 5th December 1908. They had one son, Thomas Leonard Hall Shore (1909-1980), and one daughter, my mother Anna Juliet Shore (1912-2003). Agatha died on 20th April 1950 while on a drawing and painting holiday in Paris.

I would be very interested to see a large photograph of the painting of Hanham Hall that you think is possibly by Agatha Shore. If she has signed the painting or written anything on the back of the frame I may be able to identify her hand-writing.

Robert Gresley Hall was the third son of John Robert Hall and Lucy Tilden. He was a Commercial Trader in the City of London, and Deputy Lieutenant for Tower Hamlets. He had his own business, R. G. Hall & Co., wharfingers, at St John’s Wharf, Wapping, where he traded in a variety of commodities, including tea and coffee. He rented a bonded warehouse at King Henry’s Wharf and another at Anchor Mills. In 1883 he was presented with the Freedom of the City of London, and from 1884-1922 he represented Tower Ward on the Court of Common Council. He served on several committees: Law and City Courts Committee; Library Committee; Port of London Sanitary Committee. In 1898 he was elected chairman of the Streets Committee of the Commissioners of Sewers of the City of London.

In 1889 Catherine Victoria Hall and her two friends Eliza Phillips and Margaretta Smith founded a society, now almost completely forgotten, called the ‘Fur, Fin and Feather Folk’. This animal and bird welfare group joined a growing national campaign in England against the use of feathers to adorn ladies hats and dresses. At the same time, in 1889, the Manchester based ‘Plumage League’ founded by Emily Williamson changed their name to the Society for the Protection of Birds (SPB) and launched a campaign to persuade ‘women of all ranks to unite in discouraging the enormous destruction of bird life for purely decorous purposes’. In 1891 the ‘Fur and Feather’ society merged with the SPB, now known as the Royal Society for the Protection of Birds (RSPB). In the pages of the RSPB journal ‘Bird Notes and News’ there is a record of Catherine Hall’s valuable contribution to the society.

‘Well known to a large circle of animal-lovers for her interest and sympathy on behalf of the animal creation, Miss Catherine Victoria Hall was closely identified for many years with the work of the Royal Society for the Protection of Birds; and her death at Highfield, Hythe on September 14th 1924, removes a gentle and kindly personality held in affectionate regard by all her fellow workers. Though she had reached the age of 86 she remained youthful in spirit to the last. In the first Report issued by the Society, Miss Hall, then of Lancaster Gate, appears as Treasurer, an office she undertook when the first officers were elected in 1891 and held until 1895’.

There is very little that I can add to your excellent piece about the Halls at Hanham Hall. If you have any questions about the family do let me know. Apart from the information shown in the Census Returns I am not sure of the precise date when Robert Gresley Hall first went to live at Hanham or when he left Hanham Hall and took up residence at Upton House, Bitton. 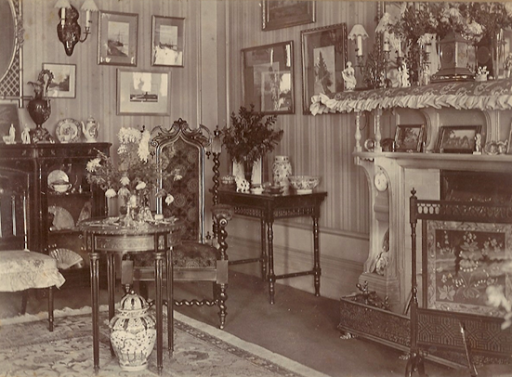 Do you recognise anything in this photograph? It could be a room at Hanham Hall.

Thank you Michael for this information that I'm sure our members and the general public will find to be of great interest.


If you are a member of the society you should have received, monthly newsletters. please get in touch if you have not. Hanhamhistory@gmail.com

The Halls of Hanham Hall

Robert Gresley HALL took up residence in the Hanham Hall in the late 1890s.  In the 1901 Census he is recorded there as Robert G. Hall, a Wharfinger in Bonded and dry goods, from London. The census also lists his wife and three adult unmarried daughters with a housekeeper, and four maids:  parlour, scullery, house and kitchen. 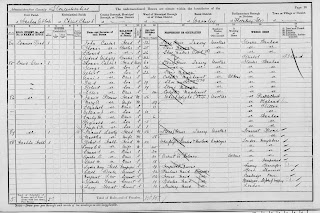 On 10th February 1876 Robert married Louisa Eleanor Annie BARBER, the couples first daughter Eleanor was born in 1877 followed by Agatha in 1878 and Edith in 1882.

On the 1901 census the profession/occupation of daughter Agatha is stated as “Artist in colours”.

In 1911 Census Robert Gresley Hall is still there with wife, and two daughters.  Agatha Catherine Hall, has now married and is visiting with her husband Lewis Erle SHORE a lecturer in Physiology at Cambridge and her infant son (Thomas Leonard).  Living with them are four maids, a cook and a nurse. The hall is stated to have 20 rooms and a gardener lives next door with his wife, three daughter and two visitors.  A Coachman lives in Whittucks Road adjacent. 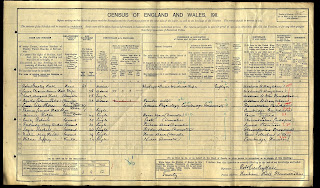 Robert Gresley Hall, Deputy Lieutenant came from a Bristol Family – his grandfather George Webb Hall of Sneed Park was 'a prominent and energetic Bristol Citizen and cut the first sod in the project to make Bristol Harbour non-tidal.  His father John Robert Hall J.P. moved to London. Robert Gresley Hall set up 'R G Hall & Co at Wapping, … specialising in various commodities such as tea and coffee and is listed as a director of the London General Omnibus Company.

Her husband was a physiologist and neurologist at Cambridge and was junior Bursar for St Johns.

Agatha has also some works in watercolour this one was discovered online:- 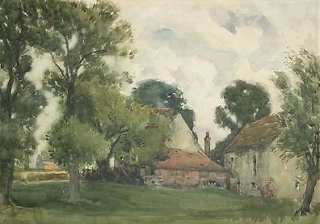 Recently I was contacted by a lady from the Midlands who has offered us this painting:- 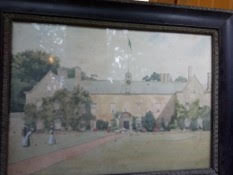 an original watercolour of Hanham Hall in 1906 – complete with three fashionable ladies playing croquet on the lawn!

So, could this possibly be the Hall girls Eleanor, Agatha & Edith or possibly is this the work of Agatha?

When at Hanham Hall Robert maintained an address in London but appears on the election roll for Hanham Abbotts in 1913 and in 1914 he is on the Parish of Bitton Roll residing in Upton Cheyney.

He died on 27 December 1922 at Craycombe House Pershore Worcestershire.

Free copies of historical wills The National Archives (TNA) at Kew is currently closed to the public. While this continues, it is allowing people to download up to 50 digitised items per 30-day period free of charge. Usually the price is £3.50 per will. Only 10 items can be downloaded at a time, but when you have done so you can go back and collect some more (subject to the above limit). Scanned PDF images of the office copies of wills proved at the Prerogative Court of Canterbury are available on this basis from the TNA site. There are over a million wills to choose from – you can search for those of interest on this page: https://www.nationalarchives.gov.uk/help-with-your-research/research-guides/wills1384-1858/ In order to use the service, you have to sign up for a free TNA account (or use your existing one). Setting up an account is easy. The link to do so is: https://secure.nationalarchives.gov.uk/login/Register The Prerogative Court of Canterbury was the senior probate court for England and Wales until 1858.
Posted by Roy at 07:20 No comments:

The Sailor and the Turnpike

The other day I was searching for a Whittuck (as you do), and I came up with two together: -  John Whittuck of Hanham House, and his uncle Charles Whittuck. They are among the many trustees mentioned in the Bristol Turnpike Act of 1758.

This gives a date for commencing preparations for the work of improving roads in the area of Bitton Parish. It confirms that Player’s Map of 1750 shows where the Stradbrook crossing was before the main A431 ran up Bryant’s Hill. The old line of the main road in those days was still that of the Roman road along and , progressing through the beginning of and up rejoining the present line at the Trooper.

I was drawn to consider the effects of the Turnpike realignments and a new idea about the development of the Jolly Sailor Inn.

I would have liked to see what lay between the Community Centre and the Maypole before the re-alignment by the Turnpike Trust.  But the next available map is the Tithe map of 1843.  It seems I shall just have to surmise that it was easy enough to drive a new wide carriageway through there because it would be the back gardens of properties in Anstey’s Road and .

In the Tithe Map of 1843, the ‘parcels’ or plots are numbered. For each numbered plot can be found a name of the plot,  the owner and the occupier according to the Tithe Apportionment Roll.  Plot 119 is ‘Jolly Sailor Inn and Garden’,  Owner Job Thomas and  Occupier Thomas Hill. 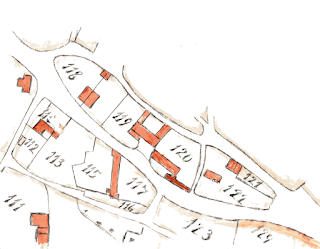 The Jolly Sailor (rebuilt), as we now know it, is not on this OS. 1844-1888 map but the old buildings of the earlier inn are shown on the frontage just as on the Tithe Map.

A sketch map or plan for a plot on the corner of Anstey’s Rd. with has labelled Anstey’s Rd. as ‘Jolly Sailor Lane’. 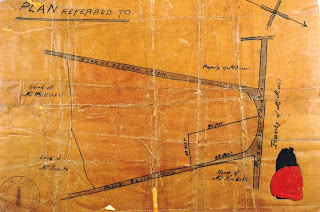 This could only have been so called because there was a rear entrance to the garden from there. That is to say that originally the premises stretched from to Anstey’s Rd. The main building we have today was completed in 1899 and is on the 1894-1903 OS 25-inch series maps. The old buildings remain as part of the rear of the premises still existing.

The earliest record we have found (Bath Chronicle) is that of an Auction 22nd October 1808 “at the House of Edward Roach called The Jolly Sailor situate at Hanham-Street in the Parish of Bitton in the ”.   Edward Roach died intestate, but in his widow Ann’s will of March 1827 the is left to his daughter and her husband George Willmott who married Elizabeth Roach in 1793.

Turnpikes were not ‘Through Route Contracts’ and it appears unlikely that we could find a date of construction for any particular stretches of improvements. It was not like a motorway contract. The Trusts worked here and there to refurbish poor sections of existing routes as funds and labour became available.
JOLLY , Hanham - Past Landlords

Building News page 193     18th August 1899 https://archive.org/details/buildingnewsengl77londuoft/page/192/mode/2up
“This house has recently been erected at Hanham, near , for the Bristol Brewery, Georges and Co., Ltd. The materials of which the buildings are composed are local bricks with stone dressings, the roof being covered with Broseley tiles. The general contract was in the hands of Mr. J. Perkins, and the plumbing and sanitary works were carried out by Messrs. J. Hunter and Son, both of . Messrs. Walter S. Paul and James, A.A.R.I.B.A., of , were the architects.”

We meet at the Hanham Community Centre (BS15 3EJ) on most first and third Wednesdays of the month at 14:00.
ALL MEETINGS CURRENTLY SUSPENDED DUE TO COVID
New members are always welcome or just drop in as a guest.
Our E mail address is HanhamHistory@gmail.com

We would be delighted if when you are clearing old photographs or documents to think of us before throwing out anything appertaining to Hanham and it’s history.

Hanham Our Home
Not Just A Name on A Stone
Hanham Our Home: The Passing Years
Hanham Through The Ages
A Walk Around Hanham
The Hanham War Memorial History

You can email us at hanhamhistory@gmail.com